In the early days of human civilisation, people formed various types of communities much like today i.e. villages, towns, cities. In those early days however, human settlements formed on a different basis – villages and towns sprawled around natural resources like fresh water, woods for timber, arable land etc. Usually the first to settle in a given area were agricultural and livestock farmers who needed access to arable and grazing land, fresh water, timber etc. As the farming community grew, more tradesmen settled there and began servicing the local needs, these were blacksmiths, carpenters, masons, bricklayers etc. With time, these communities diversified and more trades and professions formed. In later periods there were local physicians, chemists, store keepers, inn keepers etc. These were the individuals who formed a given community (village, town and eventually city). From a real estate perspective, early towns were not planned and developed naturally so to speak – more people settled here and there, providing their trade or profession to other locals.

There was no particular order or structure of where homes and other buildings were constructed, or where roads and streets were laid out – as long as everyone had their property, and a road to get to and from town this was sufficient. Back in those days however, land was more abundant and available for development. As industry and production formed, and particularly during the Industrial Revolution in Great Britain and Western Europe, land became a highly valuable and scarce resource. Many villages grew and became thriving towns. Established towns turned into large, dynamic and prosperous cities under the work beat of factories, plants and mills. The diverse array of residential, commercial and industrial estate which made up towns and cities of the day made living there somewhat more complex and specific. A mixture of housing, commercial areas and industrial estates like factories and plants presented city planners and architects with certain challenges to overcome in order to improve living conditions in these urban centres. This is how planned urban development emerged as a concept and practice. 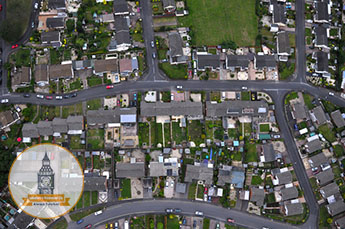 Planned urban development, although adopted and popularised across the Atlantic in the United States, actually originated in Great Britain, particularly during the first half of the twentieth century. Back then, it was industrial estates and their needs which dictated the urban development of a given town or city. In other words, factories and plants came first, only after that authorities addressed the needs of civic population such as infrastructure, housing, amenities etc. The philosophy of those days was to establish and maintain the economic base through industrial priority, and then think about the population. Although an unbalanced formula, the concept was practiced for a number of decades, though not without consequences. In the United States, the situation was reversed – most of the urban settlements in that country were privately controlled communities. They were under federal authority governance, but were given more freedom in dealing with local affairs such as urban planning and development.

In the case of United States, urban planners were addressing the housing and amenity needs of local residents with priority, and then thought about attracting industry and commerce to these newly developed towns and cities – the opposite to what was the case in Great Britain. In North America, planned urban development gained momentum after the end of WWII and continued for decades. Nowadays, planned urban development is quite a big deal and spans over all construction and development projects in most of the western world. The random settlement and development principle of days gone by is no longer feasible, and strict planning is applied when developing new communities, or refurbishing existing ones – urban regeneration projects across UK for example, or inner city revival projects in North American cities.

Zoning Ordinance – official (written) laws and regulations governing the use of land in a given region. Usually covers residential, commercial and industrial land use, as well as density and height of structures in specific zones of the region.

Zoning – it is not the same as zoning ordinance as it concerns the use of existing real estate over a given region, not the land on which this real estate stands. Basically, zoning is the set of laws and regulations governing the use of buildings i.e. residential zoning means no industrial or commercial estates can use structures in a given area and vice versa – individuals are not allowed to settle and dwell in designated industrial parks and commercial estates.